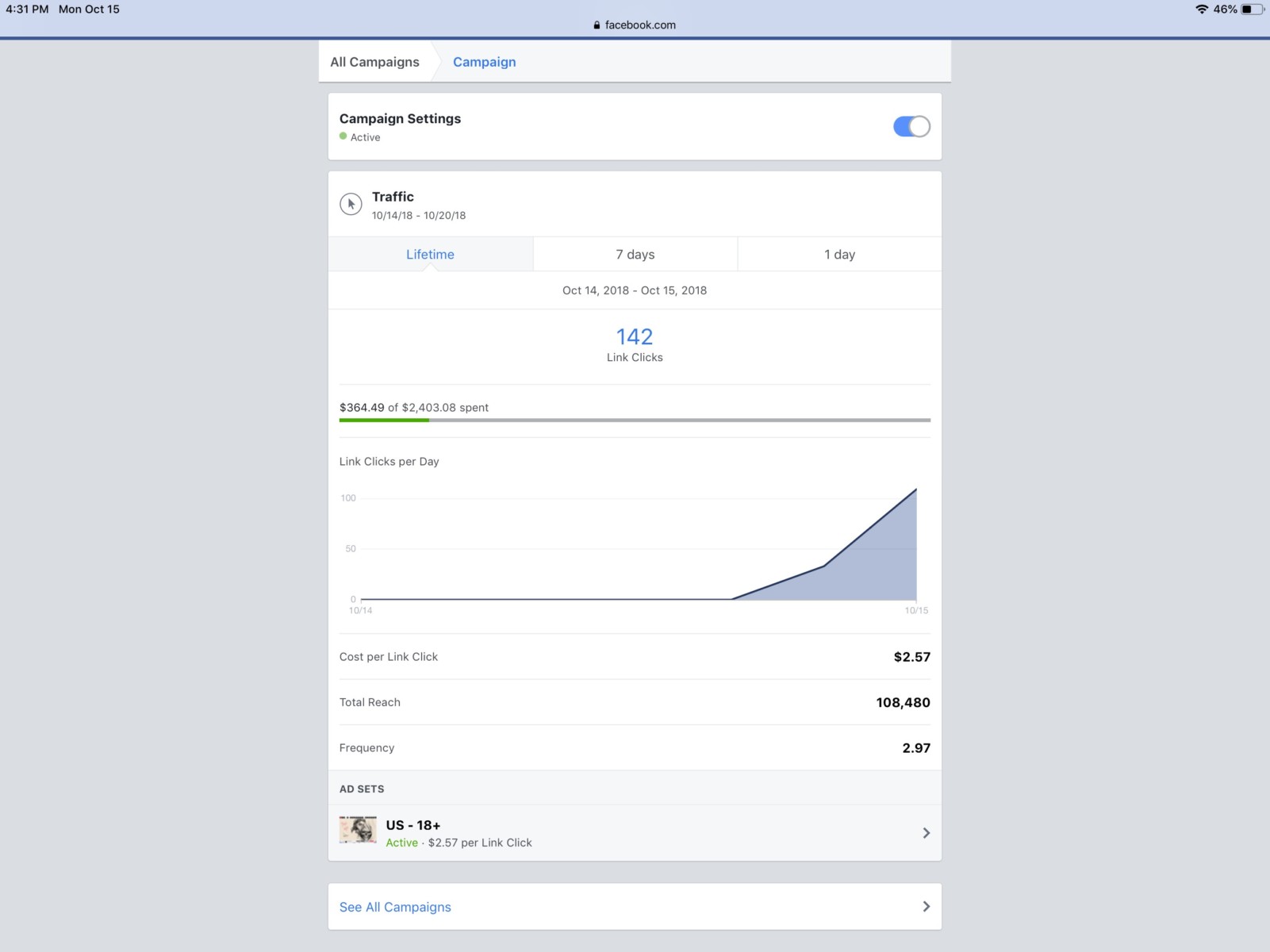 I figure TattApp won’t sell if no one knows about it.  I have some YouTube videos on my channel that have gotten tens of thousands of views, so I thought making a demo video with TattApp would be enough to get the word out. However after a few days the views on that video have tapered off.  So last night I decided to make a Facebook ad.

I chose New York and Los Angeles as the starting locations and I targeted people with interests in tattoos. Facebook estimated I could reach up to 6 million people. I set the ad to run for a week. After starting the campaign, I checked the statistics and saw that I am being charged almost $3 every time someone clicks on my ad.  I didn’t know about that part. It has been about 20 hours since I started the ad and I already have 142 clicks.  Math tells me I am spending a lot of money on this campaign.  And mind you just because someone clicks the ad doesn’t mean they buy the app. There will be no profit from my decision.  But my hope is to at least get people to know that the app exists.  When enough people know about it in the tattoo community hopefully word will spread. I may end the campaign early so I don’t go broke.  There is still the very real possibility that TattApp could not be something people want.

Last night I did a tattoo that I consider highly difficult.  It was two arrows going around a forearm.  Most people would probably think such a tattoo would be easy.  And maybe for some artists it is.  But give me a portrait any day, I struggle with tattoos like this.  Two straight parallel shafts going around an odd shaped tapered form such as the forearm where the ends must meet up.  I spent almost an hour just trying to get the stencil on her.  I ended up laying three different stencils in parts where things laid out poorly, and I had to freehand some things to get them to line up properly.  Then it took another hour and a half to do the tattoo. Today was session number three on the massive upper arm coverup piece. I chose to work on the koi fish back on his tricep. We got in three hours. Here is the design I drew up on my iPad, followed by today’s tattoo progress. There’s still a lot to do. And as if this coverup wasn’t difficult enough, he’s got tattoos on his other arm that he also wants covered up. And they are going to be much more difficult. arrowscoverupFacebooktattapp
Backpiece and Freehand
Some Time Off