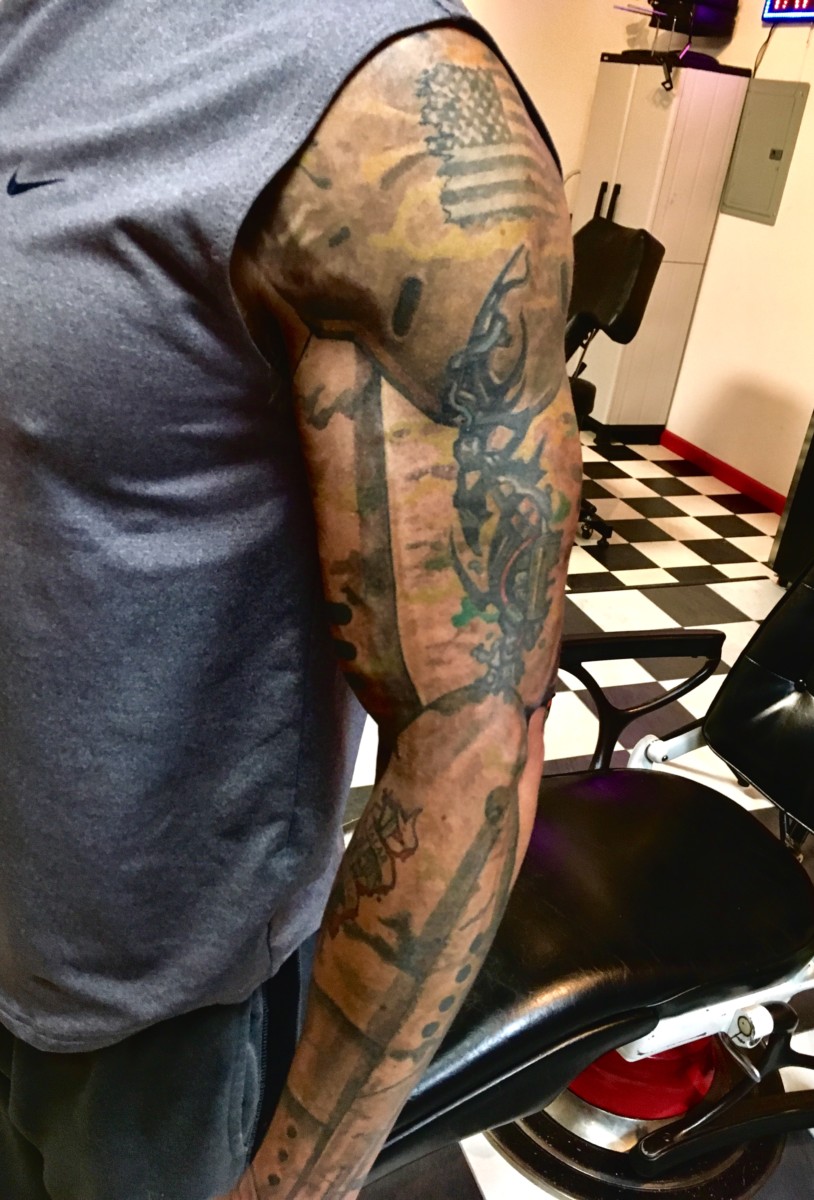 I’ve been working on a camouflaged armor sleeve for a very long time now, usually 2-3 hours at a time. I hadn’t seen the client in many months (scheduling conflicts and my ever-expanding wait list) but he made it back in the other day and we trudged onward. The nice thing about this session was that I was able to see an end in sight. We have probably two sessions left to completion. I acknowledged the hansa design client’s disapproval of her design and suggested getting rid of all the hard lines. I also said we could scrap the design altogether. She wants to try a female lion instead of the male and see if it helps. And for my rough day yesterday, I did the tattoo commemorating my clients deceased sister. I anticipated 3 hours and everything was going great…until we started creeping into the fourth hour. I started getting frustrated at how long the tattoo was taking, mainly because I told her it would be 3 hours and I was clearly wrong. The ink was going in slow, but with multiple passes it was going in. By the time I got to the face most of the stencil was gone. I really wanted to spend some time working on the face, but we were already so far over schedule, I was frustrated, and with her being a cross fitter I felt like she was probably really hungry, so I made the call to stop the tattoo. I felt really bad on this one because I know this is a very special tattoo for her. I only charged her for 3 hours instead of the 4.5 hours I spent on it, and I scheduled her for a free touch-up appointment in exactly 2 weeks so I can get back in there and finish the face with fresh energy and also tidy up the entire piece. And this afternoon I finished up the Wallace Family Crest tattoo.  I added clouds around the entire piece with a 17-curved magnum needle cartridge and tidied up some lines and shading in the leafing with a 5-liner and a 9-curved magnum. Two hours on session number three and we are done! armorcrestgeneralHansaIn progresssister
Fires and Dark Skin
Tree and the Dealer