Putting in the Time 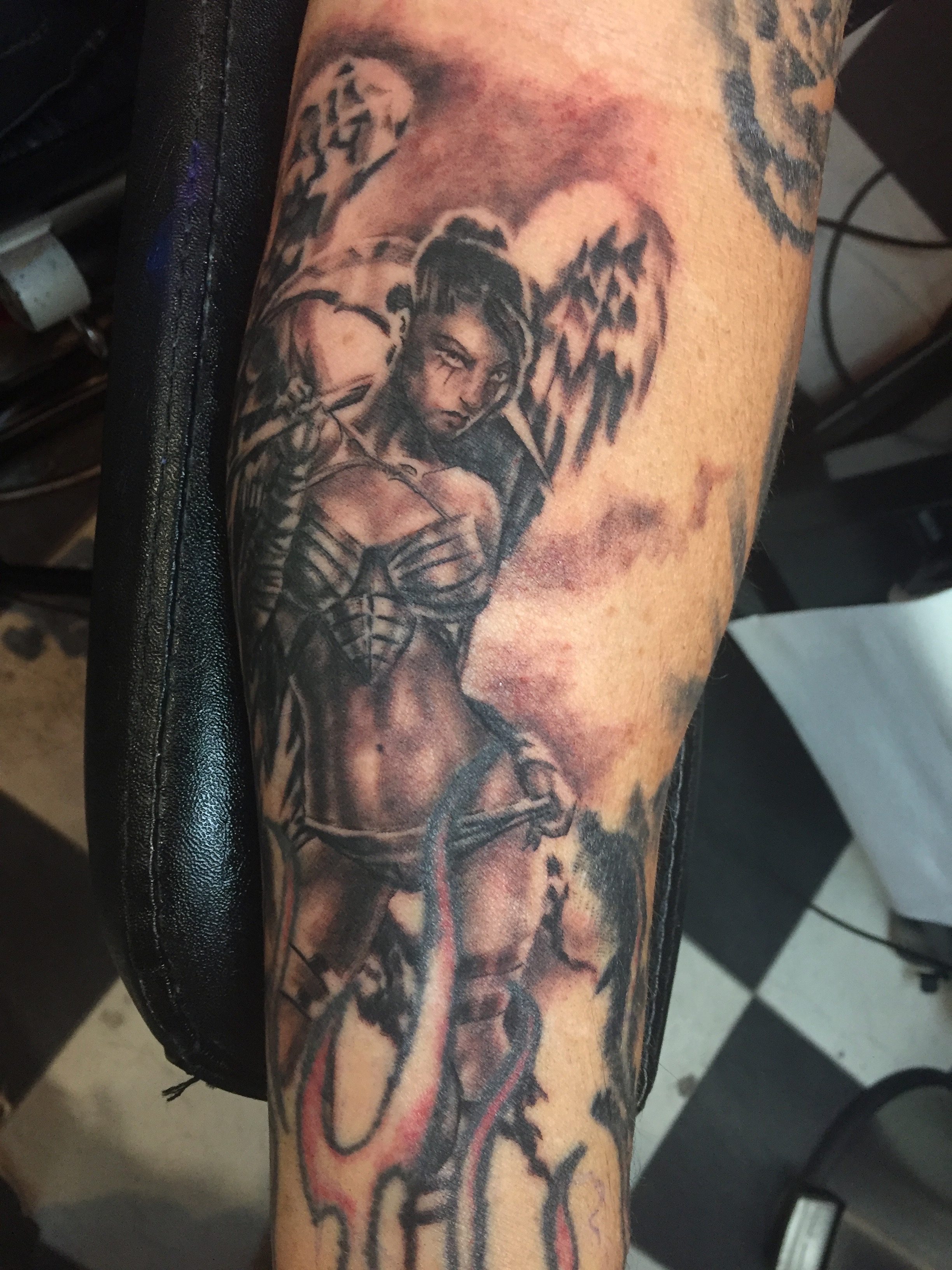 We’re getting close to the end of a full sleeve. I was able to fill a good portion of my client’s forearm with this menacing woman. I didn’t get completely finished with her. After 3 and a half hours we were both getting hungry. I was happy with the progress. I reversed the design last minute just before I applied the stencil so that she was facing forward on his arm. I had to use smaller needles. The face was very challenging but I got into the zone early on and never left it.

I got in some design time this week on some I’d been avoiding. I forgot how tedious and time-consuming drawing and coloring ships could be. And this is only the first one. I have to draw up two ships, and also a Kracken-type creature. This one is almost done. I also worked on a coverup design that I have been dreading. There’s so much dark black in concentrated areas that I have very little wiggle room to design anything that will look good. I got an initial idea down, but we both would still like to see something a little better. Blank skin is so much easier. Yesterday I started on an outer half sleeve. The client got her first tattoo from me back in 2002 at my little shop on Maine Street here in Fallon, Nevada – a big lady bug in the center of her back. For this piece she wants all line work with minimal shading. The grays should lighten up as it heals. A have a good friend from Vegas who had to come in to town for a funeral. This is the same guy who I’m going to have redesign the look of TattApp. He needed to create a slideshow for the funeral and didn’t bring any gear, so I let him have my shop for a couple evenings so he could work on my computer.

He also pitched me a really cool project he’s working on with some people in Vegas and England. I really thought it was a cool animation project and was happy for him to have some cool work. Then he surprised me and asked if I wanted to be the director of 3D animation on it. Uh…YES!

Later I heard a loud bang outside so I went out and saw that he was leaving and had backed up off the retaining wall. It’s so dark out there at night he just didn’t see it. I pulled out my floor jack and lifted his back end up enough to get his driveshaft off the bricks. Then we removed more bricks so he could back out. It worked. But he was back shortly because he couldn’t get over 25 mph without the whole vehicle shaking. His driveshaft was bent. He was able to get it to a shop the next morning.