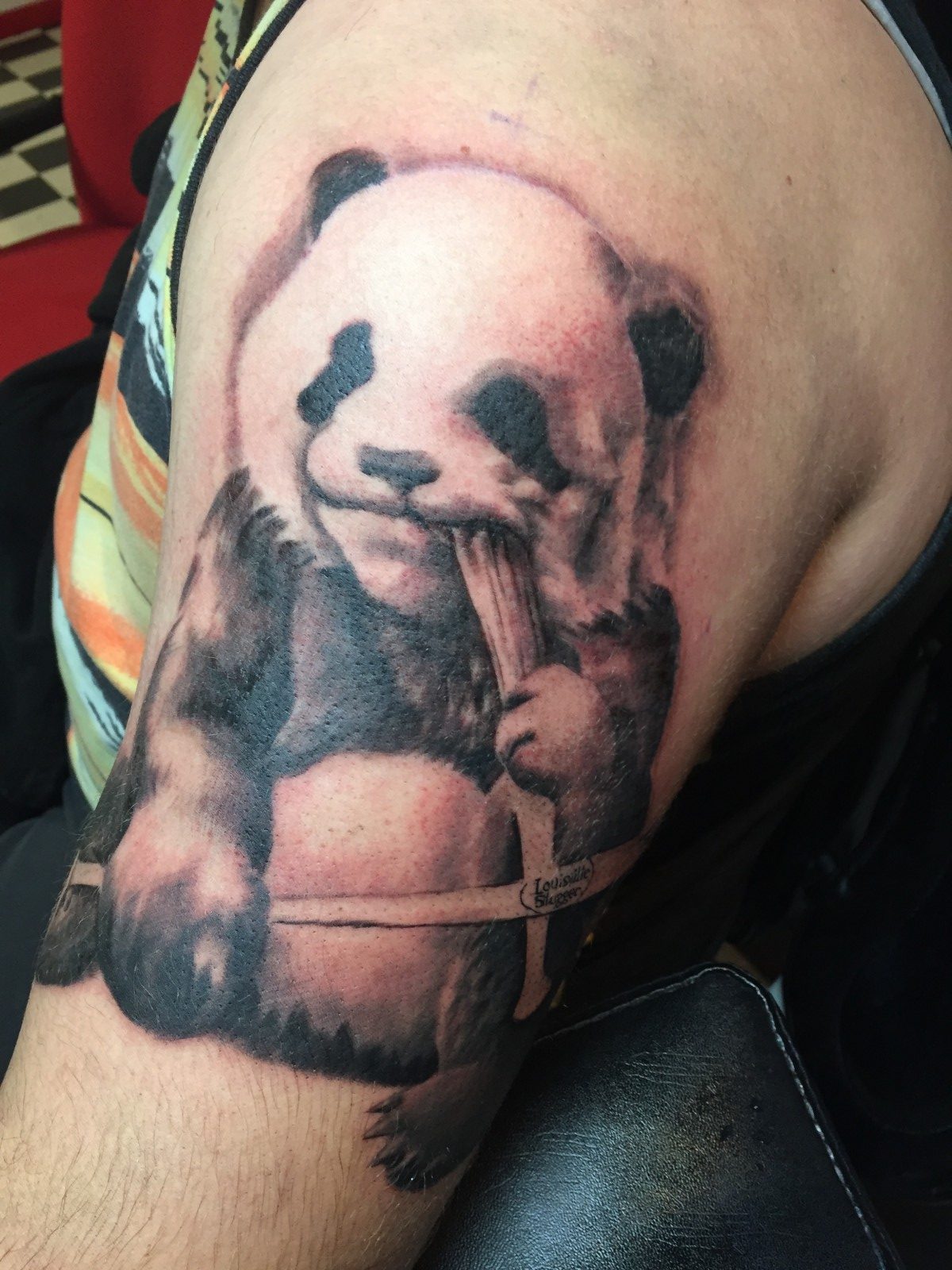 I had a day off on Thanksgiving.  We ate at my sister’s house and then I fell asleep on her couch.  A couple days before Thanksgiving I started work on the big Panda Bear eating baseball bats. It went smooth, no problems – close to three hours.  I think I have about an hour and a half left to finish it.

The day after Thanksgiving I worked on the video game villains piece.  Again it was slow going.  All that detail in such a small area requires small needles and just takes awhile to cover a large area. I spent a lot of time working on TattApp over the past week. What helps is actually using the app. The more I work with it, the more I am able to find things that aren’t working right or discover ideas to improve things.  I think I was able to work out all the remaining kinks. One thing that bothers me is that to undo something, you tap the screen with two fingers, and to rotate the workspace you put two fingers on the screen and rotate them. Every time I rotate my workspace, it also undoes my last drawing mark. I have to look into how to make that work better.

Aside from that, I took a bunch of screenshots while I was using the app to create a piece of new artwork. The goal was to create a User Guide for TattApp with diagrams, descriptions, and photos. Here is the artwork I created on TattApp for the User Guide: I got the idea from a painting I had done back in 1996.  I no longer have the painting and I think it was actually taken by a truly rotten ex girlfriend. I just tried to find a photo of the old painting…I know I have one somewhere that I could probably scan…I did find this digital file…it’s super low resolution: Anyway I got the User Guide all finished and added it to TattApp. I then uploaded the update to the Apple Store.  Hopefully it will be approved tomorrow and released to everyone who bought the app.

Last night I was sitting on the couch while my son was playing some Roman strategy war game. I was just messing around with TattApp trying to sketch up something just for fun, no idea what I was going to make. I started with a figure because I love trying to draw people out of my head. I started with basically a stick figure and then began adding shapes and forms. Pretty soon I had what I felt was an interesting figure: I decided to take my drawing into another app called Procreate.  From there I started adding shadows and highlights and colors.  By the end I felt I had a cool conceptual piece.  Maybe I can make a painting out of it someday. artworkpandatattappvideo games
Putting in the Time
Concepts and Tats