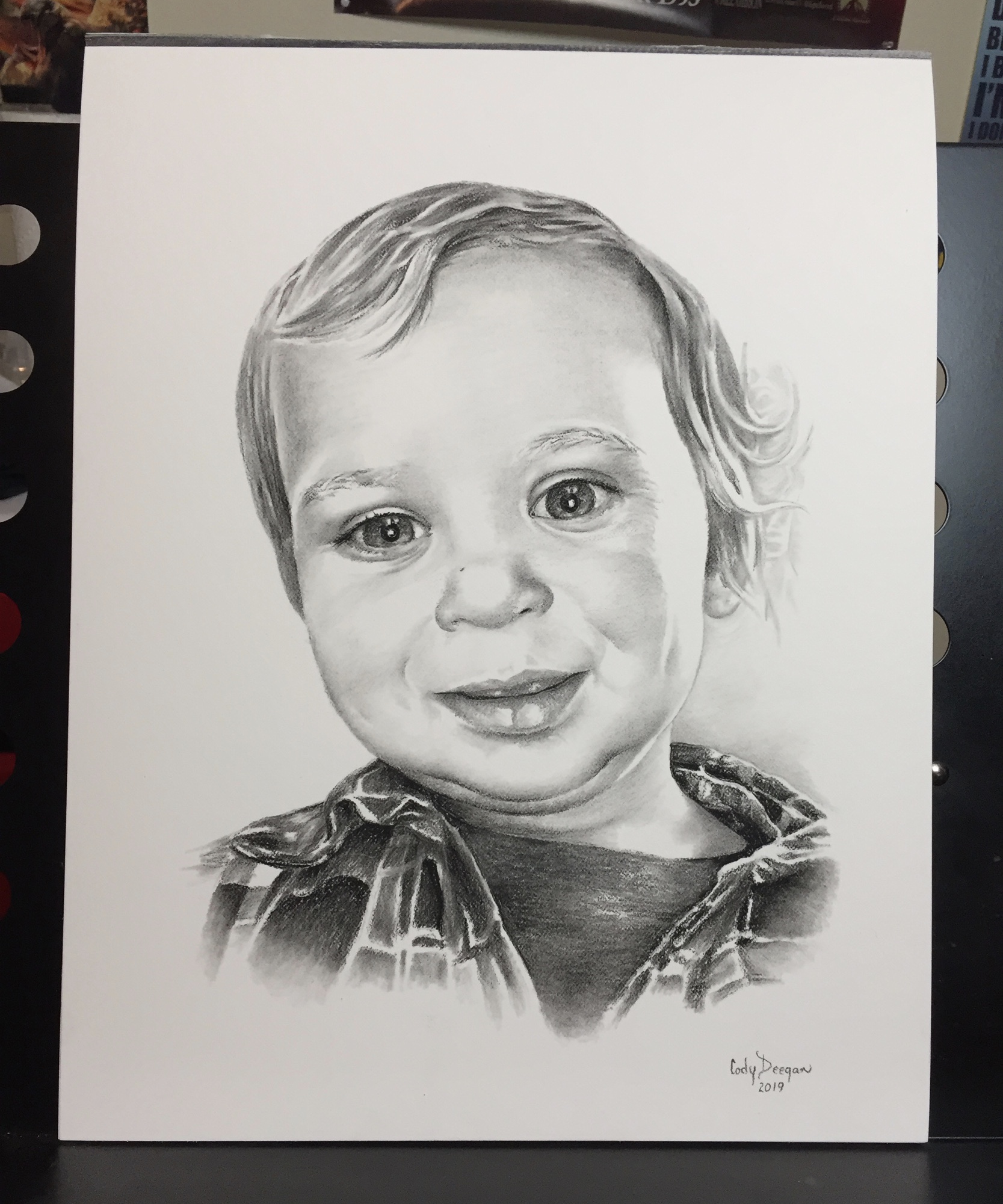 I was asked to draw a little boy who drowned recently as a gift for the family. I used charcoal pencils on Bristol board and finished it in 7 hours. The grandparents of the boy have since asked me to draw them one.

I did a flying pig in remembrance of the client’s brother who recently died. He liked riding Harley Davidson motorcycles and she felt the design represented him well.

I got another 3-hour session in on the Viking skeleton. I’m happy with how this one is shaping up. The client is handling it well for his first tattoo.

And his mom got through her fourth session with her Lily’s.

I started a fixup on a poorly executed tattoo. I covered the lady’s face with white ink in hopes of lightening the black work so I can come back and put in a new face. Still so much more work needed.

I got some trees and rocks added to the elk piece.

Adding to the wing, I’m adding a flag to cover an old tribal tattoo. One more session needed to finish.

I got the color portrait done. I feel I need to revisit it and do some refining, but it was a good start. He’ll be adding more characters to fill up his leg.

I tattooed this tree in 1.5 hours. She had an old ladybug tattoo that she wanted covered with it. I had tattooed her dad a few years ago who got a memorial piece for his son who had died.

I’m working on an arm piece for a young lady who wants to get tattooed on Friday the 13th next month. I’ve tattooed many of her family members.

More progress on the Nightmare before Christmas sleeve.

His sister and cousin got matching Toy Story tattoos.

I’ve been commissioned to create a digital portrait for a family mourning the loss of a father, so to prepare I have been practicing using a software program called Painter. It can simulate oil paints pretty good. I should be starting the actual painting this week.

I have a dog portrait tattoo coming up this weekend and I have struggled to get the artwork to the client’s satisfaction. The photo I was provided had the canine in a crate with bars in front and poor lighting. I think she is happy with what I have drawn now.

My older sister sent me this photo of me rocking a Mohawk with my guitar gig bag on my back from 1996.

And lastly here’s a design for a client who was a student in my video production class when I worked at a school.