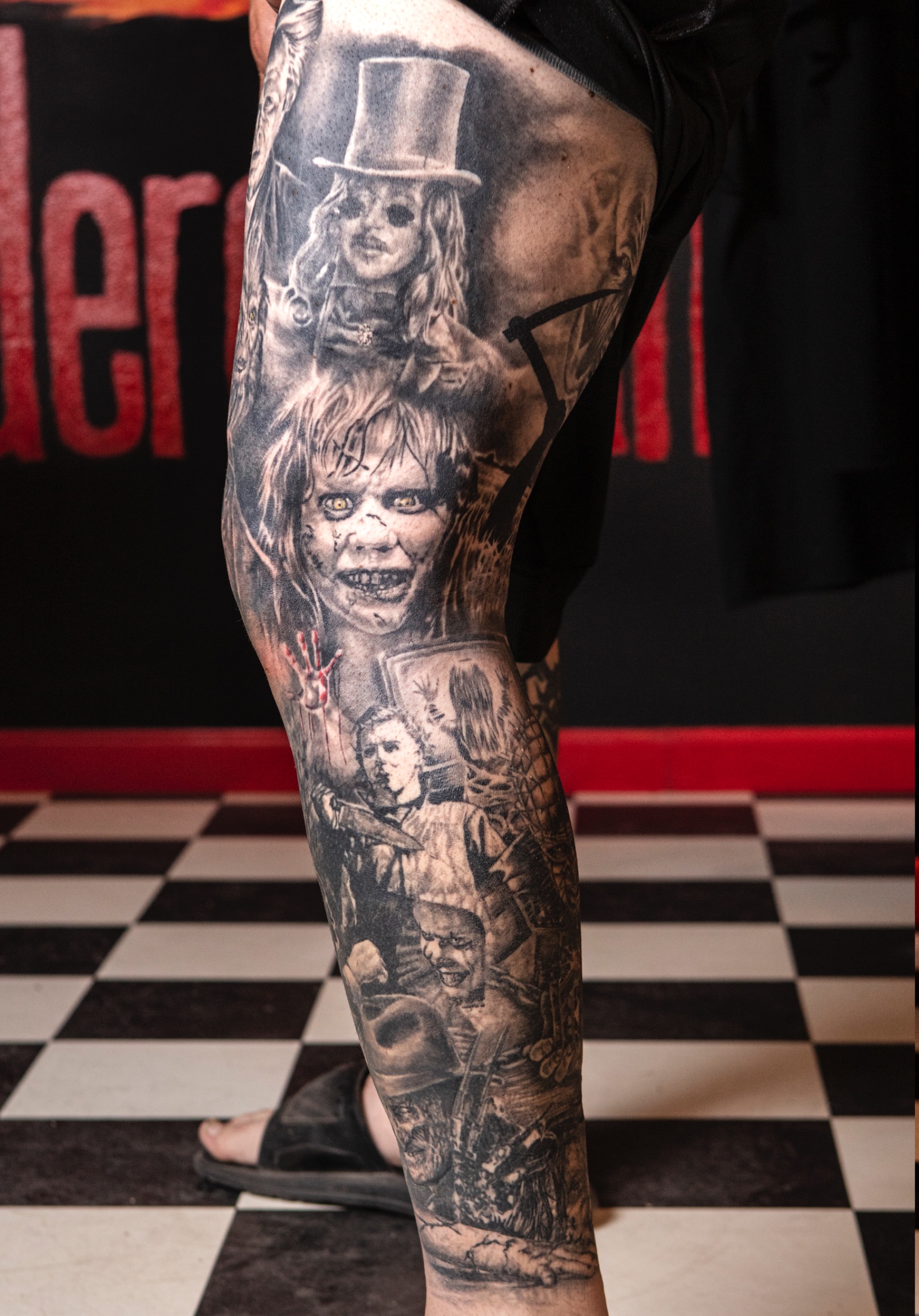 The horror movie leg sleeve is finally done. I need to go back through all of it and do some more touch ups, but overall it’s pretty good. My tattoo skills have improved much since we first started it 7 years ago. I can still see areas where I need improving, but just looking at the most recent touch up I did on Hannibal Lecter I can see how much better my work has gotten.

Every so often one of my previous client’s son comes into town and has me add to his Japanese-themed arm sleeve. This time he had me add Mount Fuji and a Torii in the water.

I continued work on another Japanese-style sleeve that involved two coverups. It was nice to work on background elements this session instead of the covers.

I started a cherry blossom garter with roseary beads and butterflies. Next session I will finish the cherry blossoms going all the way around.

The Viking skeleton piece is almost done. I got the crow’s wing put in and now we just have touch ups left.

The camping scene with forest and elk is getting close to being done. I put in a sky and more background.

Here’s a simple alien head I did on a young lady.

This guy already had a faded tattoo of the number 22, so I redid the colors and added a checkered flag behind it.

The gargoyle redo is coming along nicely. I might get it done in the next session, but I think I may need one more after that to finish it completely.

This is the same guy who got the horror movie leg sleeve. I forgot to take a before picture. We’re redoing his entire arm now, going over the old tattoos and bringing new life to them.

This guy had an old nasty tribal tattoo in the center of his back. He recently had me do the wing, which we were going to try and use to also cover the tribal, but then he decided on using a flag instead.

I started this piece and was surprised how much I got done in 3 hours. More detail and hopefully finishing up the forearm in the next session after he gets back from hunting season.

This is a sea dragon. I added it to her ankle as a part of her underwater leg sleeve. She’s married to the guy with the horror movie leg sleeve. And fun fact – I was their wedding photographer.

I just did this hummingbird tattoo a few minutes ago. She’s married to the guy who got the Jim Carey tattoo and the Squints tattoo. Fun fact – I was their wedding photographer.