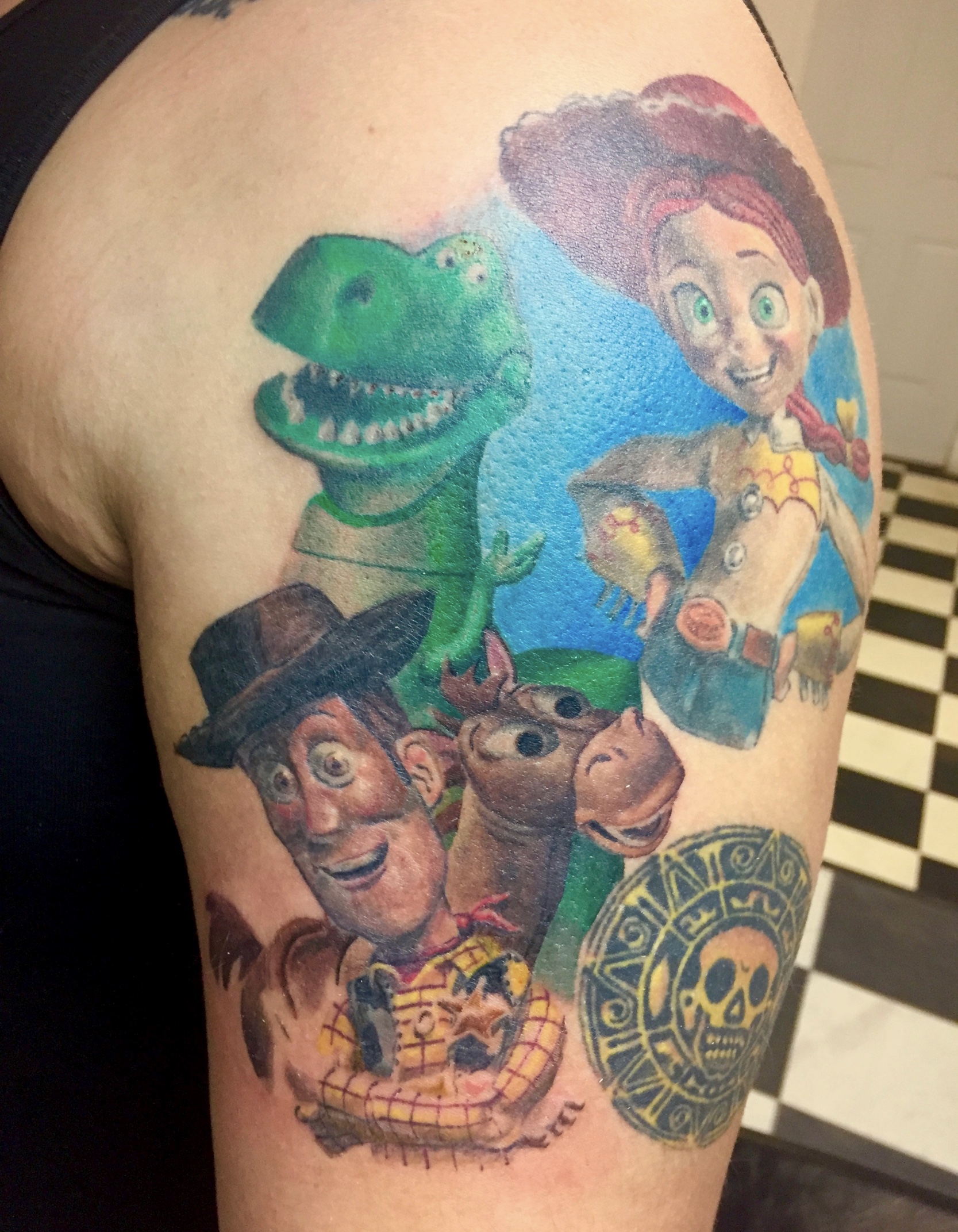 I got Rex and Bullseye worked in to the Disney sleeve. Next session I’ll start Buzz Lightyear, then we’ll move downward with some Pirates of the Caribbean stuff and Nightmare Before Christmas.

My neighbor came in for her 4th session and got some poppys added to her floral piece. Next time will be some daisies or Gerber daisies. I’m going to work them all around the lower half to frame and finish the piece. I have a clan that has been keeping me very busy with the tattoos. Triplets, an older sister, and two in-laws so far. Their mom may get in the chair eventually. One had a gnarly tattoo of fireworks and what was supposed to be a feather. She hated it and was in need of a coverup, so I collected some pictures from her of tattoos she likes and worked out a design to go over the tattoo. She is now thinking about expanding the design up her forearm. I’ve been working on some dragon and cross designs. The first one I sent was cool, but he wanted the dragon standing rather than crouching. He had a specific color scheme in mind using birthstone colors for his family. He agreed to my revised color concept and I drew up the stencil. We started with an hour and a half session to get the design in place. In three weeks we’ll go again and I plan to complete the cross and body. Wings will probably be done in a third session. Remember the reptile sleeve I had in progress? Well he added his tarantula and a web to the inside of his arm. I finished up a sleeve on the other in-law from the “clan”. Technically it was his second touch-up session. I offer a free touch-up within the first year of getting a tattoo so I went through and fixed anything that wasn’t looking quite right. Now for the upsetting news:

I’ve been working on some new major updates to my tattoo practice app. I made some really great additions and was excited to release version 1.98. Then yesterday morning I got a notice from Apple saying my app was rejected.  What? That never happens. So I log in to the site and read their reasoning.  They said that because my app requires the use of an Apple Pencil, it is not considered worthy of being on the app store.

My first thought was that Apple wants my app to be useable by anyone, so I am imagining small children using my app and drawing on the screen with their fingers.  This just makes no sense to me.  I built the app around the Apple Pencil, which allows for pressure sensitivity and directional orientation.  That’s what makes it able to simulate tattooing with needles.  You can’t do that with just your finger!

So I submitted an appeal to Apple.  I have not heard back so hopefully their decision will be reversed.  This is a huge blow to my progress with TattApp.

I spent about 5 hours last night making a new TattApp video for my youtube channel to help promote the app.  I contacted Kent Bartley of Evolution Tattoo in Troutdale, Oregon to see if he’d give me permission to use one of his tattoos for a practice session with my app. He graciously allowed me to do so.  SO last night I attempted to demonstrate how a person could find a picture of a tattoo that they really like and try to emulate the style using my app.

I think I did a pretty decent job.  My arm really hurts today, so hopefully it will be worth it.  Come on, Apple! coverupdisneydragonfloralflowersPixarsleevetattapp
Eating Income and My Mug
Ever Onward and Upward