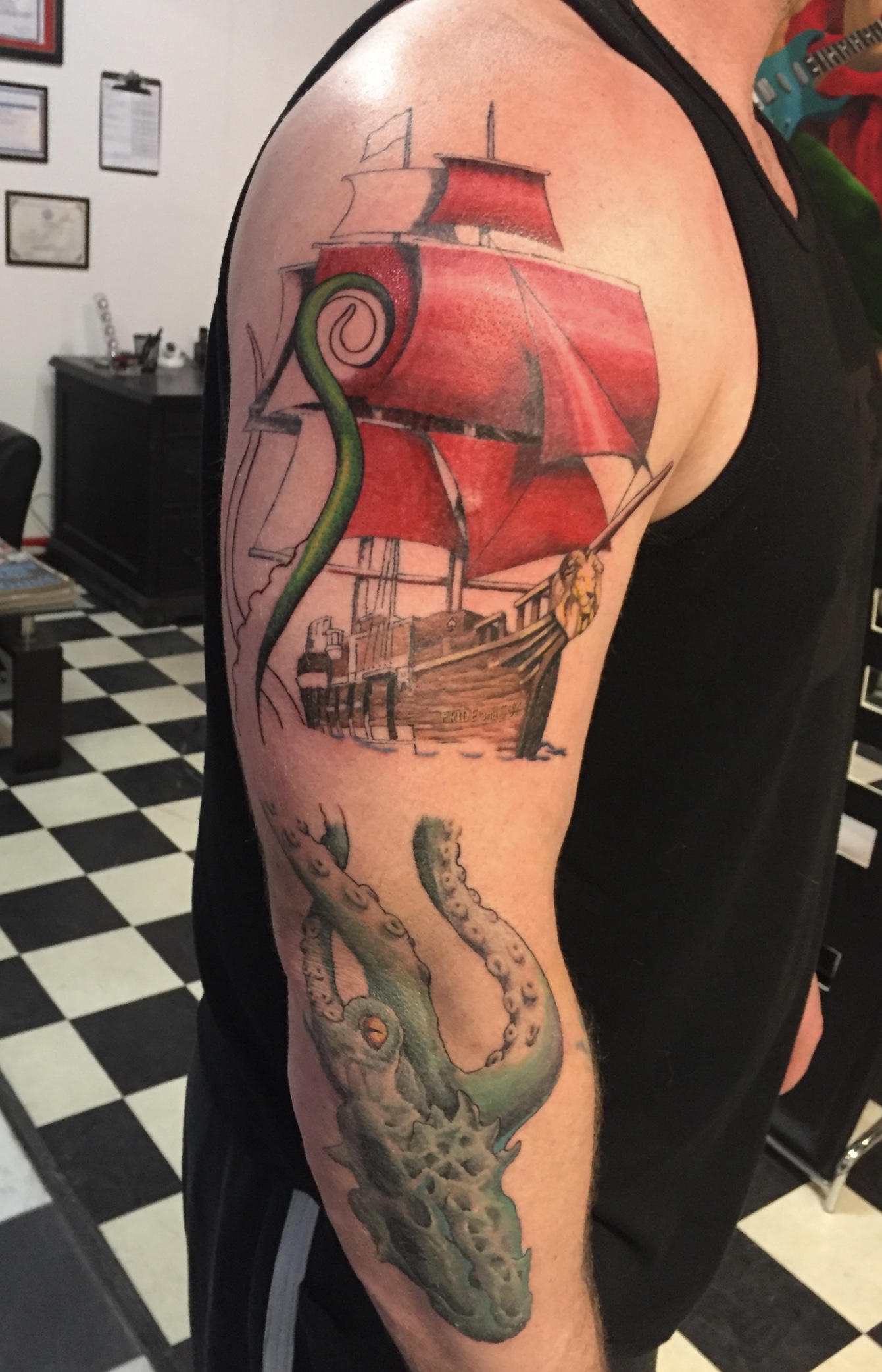 The sailing ship and Kraken piece is shaping up nicely. My client has me listening to an audiobook while I work on him that is set in the Star Wars universe 1000 years before the movies. The lore is pretty interesting, and I realize I don’t know too much about Star Wars for someone who grew up with the movies, posters, and toys. I worked close to 5 hours trying desperately to get the ship finished. The client who gave me the iMac is moving to the east coast in June, so I am hoping I can have this floral piece finished in the next session. I got some daisies started, and I also did some touch ups as I went. She also wanted a phrase on her forearm, so I ended the session with that one, which didn’t take very long to do. My client who works on the Disney cruise ships got in one more time before his road trip back to Florida, and I was able to get his leather armor pieces finished. It’s not often I have a client approach wanting me to take over a tattoo-in-progress. This lady was not happy at all about her experience getting a large arm piece done. She said it hurt terribly, and judging by the massive amounts of scar tissue all throughout the color areas, I have no doubt it must’ve been miserable. So I sketched up a color rendition of how I would color the tattoo. She said she wanted a blue and purple dragon, but the previous tattooist decided on green. So I am tasked with trying to turn it blue and purple. We went for an hour and a half on her first session and I focused on the dragon scales. I have never seen so much scar tissue on a tattoo before.

I was driving my Jeep the other day and as I got up to 55mph on the highway, something came flying off my fender across the windshield. It hit the pavement behind me and I quickly pulled off the road. I backed up the Jeep to see what it was.

It was my iPad Pro.

Earlier I was doing some work in my garage and I was using the Jeep’s fender as a shelf for my iPad. I forgot it was there when I left for town.

I had to wait for four cars to pass, and they all missed hitting it. After retrieving it I couldn’t even look at it. It was probably an hour later before I worked up the nerve to survey the damage.

The back of it was all beat up and dented, but the screen was fine. I played around with it and everything worked just fine. Huge relief. Disaster averted.